The very name of the organisation – ‘Human Rights Watch’ – conjures up a vision of some benign guardian keeping a watchful eye upon the (mis)conduct of governments and ensuring that gross violations of ‘human rights’ are brought to the attention of men and women of good intent around the globe. Who can argue against the desire to protect life and limb, freedom of conscience and equality before the law? These all strike me as eminently sensible; the prerequisite foundations for any just society. However, ‘Human Rights Watch’ has revealed itself to be something other than what I have described, and paradoxically, through a muddled combination of globalist universalism, abstract individualism and cultural relativism, has now found itself in a situation where it is actively facilitating the spread of an ideology and its bearers that do not recognise the concept of ‘human rights’.

“The United States and other Western governments must accept the new reality that Islamists have emerged to fill the power vacuum in the Arab world after a wave of popular uprisings, Human Rights Watch said in its annual report Sunday.
The New York-based group also urged Islamist parties, which have emerged as the biggest winners in recent elections in Tunisia and Egypt and are expected to fare well in Libya, to respect the rights of women and religious minorities, saying they cannot "pick and choose" when it comes to human rights.
Islamist parties are "genuinely popular" in the Arab world, said HRW's executive director, Kenneth Roth, warning that "ignoring that popularity would violate democratic principles."


"Being a political Islamic government should not be a reason to turn a government into a pariah," Roth told reporters in Cairo, where the group released its annual report.”

For some reason, HRW staff appear unable to appreciate that Islamism is based upon an outlook entirely alien to their own which does not recognise the abstract human rights that they purport to espouse. This is what makes HRW’s comments regarding European countries all the more worrying:

“The group also claimed that even member states of the European Union have violated human rights through restrictive asylum and migration policies.”

Effectively, HRW is seeking to deny Europeans the right to national self-expression and self-determination, and would instead be content to see such a mass influx of Muslim immigrants that they would undermine the very foundations of human rights themselves across Europe, as well as national citizenship rights. HRW is deeply infected with the bacillus of cultural, ethnic and racial self-loathing characteristic of the dominant ideology within European countries and their daughter societies America, Canada, Australia and New Zealand. So deep and entrenched is this self-loathing, that today HRW published an article by Benjamin Ward entitled ‘Europe’s Treatment of Minorities Endangers Our Core Values’, key extracts being reproduced below:

“EU governments proved reluctant to help refugees and migrants fleeing Libya, including people risking their lives at sea in rickety boats. European countries have been quick to resume migration cooperation with Libya, Egypt and Tunisia with the aim of speedily deporting migrants who reach Europe, including those originating from Sub-Saharan Africa. And the arrival of Tunisian migrants in Italy last year led to a row in which leading EU governments questioned aloud the value of free movement, a fundamental EU pillar.


When it comes to Europe’s domestic human rights record, the long-term trends are deeply worrying. As a new essay from Human Rights Watch explains, four trends stand out: the erosion of civil liberties in the fight against terrorism; the rise of populist extremist parties and their negative influence on mainstream politics; the declining effectiveness of traditional human rights institutions; and growing intolerance and abuse toward migrants and minorities. Taken together they amount to a crisis.”

Thus, HRW has reached well beyond its original remit of documenting and campaigning against human rights abuses in totalitarian societies, and has instead moved into the realm of globalist political lobbying, effectively acting as a vigorous advocate of the ‘no borders’ movement. It calls for the undermining of democratic process and choice in European nations by denigrating the domestic desire for national security and solidarity through its use of demonising terminology such as “populist extremist parties.” If European nations are unable to protect their own citizens and their own cultures, then they will be swamped and destroyed by alien cultures and peoples not so reticent about using whatever means they deem necessary to impose their will and demographic stamp upon the territories that they occupy. The demographic danger that European nations face hails predominantly from Africa and Asia, and this immigrant horde carries with it an ideology that shows nothing but scorn for the values that HRW claims to hold dear: Islam. These demographic interlopers cynically employ the ideology of ‘human rights’ when it suits them, without believing in its content. So, why is it that the earnest types at HRW fail to understand this basic fact? Perhaps the following goes some way to explaining it.
One of the notable features of recent history is the manner in which concepts of human behaviour, rights and responsibilities born and elaborated within European societies and their settler colony offspring have come to be seen, particularly by the natives of these states, as universally valid and applicable. Initially, these ideas were spread to almost every corner of the globe as a consequence of the dominant geopolitical position of these powers, either through their direct dissemination by systems of colonial education, or via newly accessible texts printed in imperial languages such as English, French and Russian that were eagerly devoured by emergent colonial intellectual elites. Peoples who had previously lived their lives in accordance with non-occidental norms and values dictated by the specifics of their religious, caste or tribal affiliation, were thus exposed to radically different ways of conceptualising nature, society and the individual, as embodied in specifically Western ideologies such as Liberalism, Socialism and Marxism. Even in those non-Western states that avoided colonisation, the success and dynamism of occidental societies spurred a thirst for emulation, as best exemplified by the case of Japan.
The apogee of occidental power was brought to an end by the First World War which dented Western self-confidence and gave birth to a sense of profound doubt and pessimism with respect to the nature of Western Civilisation and its achievements. It, together with Japan’s defeat of Russia in the Russo-Japanese War of 1904-1905, led to the emergence of a growing revolutionary confidence amongst colonial peoples, both in the form of anti-colonial nationalism and also revolutionary Marxism, with the two often fusing under Soviet and then later Chinese tutelage. The Second World War dealt a further blow to occidental confidence, with Europe subsequently divided into rival Capitalist and Communist camps headed respectively by the USA and USSR. It was the experience of the 1930s and WWII that enabled the predominantly Jewish émigrés of the Frankfurt School who had established themselves in American academe to propound and propagate their dogma of multiculturalism and ‘anti-racism’, which was later exported to Western Europe owing to the hegemonic position of the USA in that half of the continent. Decolonisation, ‘national liberation struggles’ and the New Left born in 1968 fused with US multiculturalism to create a new sphere of leftist identity politics, that whilst seeing itself as ‘radical’ and ‘oppositional’ at the time, has come to form the hegemonic discourse of Western nations today: multiculturalism, political correctness and cultural relativism. From this so-called movement of ‘liberation’ stem the social balkanisation, censorship, thoughtcrime and self-denigration and abasement before other cultures, most notably, before Islam, that characterise Western societies in the current period.
This effective collapse of self-belief within the West has led to the self-loathing mode of thought that characterises the perspective of Human Rights Watch, which whilst more than willing to condemn generous and tolerant Western societies as being ‘intolerant’ and a danger to liberty, is keen to also turn a blind eye to the inherent barbarity of doctrinaire Islam and Islamism. By doing so, HRW is effectively running the risk of calling for the burial of the West, and its replacement by unbending, intolerant and barbaric theocratic social norms and punishments. HRW thereby reveals itself to be a decadent organisation that actively undermines the ideals it was established to defend. Founded in 1978 as successor to Helsinki Watch, a body created in 1975 to monitor human rights abuses in the then Soviet bloc, it has in recent years received its primary funding from George Soros’s Open Society Foundation (formerly Institute). Wikipedia reports that Soros donated $100 million of the $128 million that it received in 2011. Soros of course has caused a great deal of human misery through his speculative activities and has ‘warned’ of the rise of nationalism in Europe. Might not his money have no small impact upon the focus and activity of Human Rights Watch, and its anti-democratic, anti-European and anti-nationalist agenda? [Hat tip to Cygnus for sending the link which suggested this piece]. 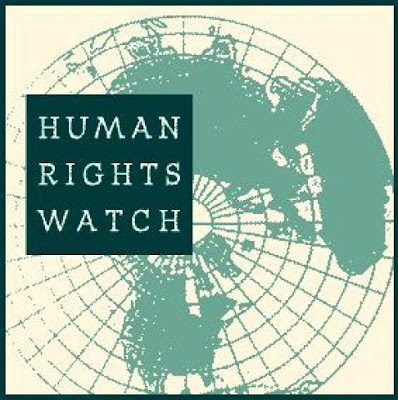