Rally for Free Expression: One Law for All 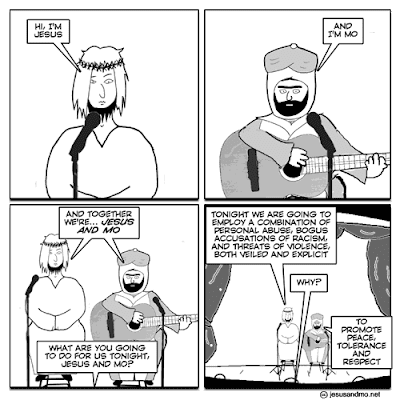 The One Law for All (OLFA) campaign will be holding a rally for free expression in London on 11 February between 14:00 and 16:00. OLFA campaigns against the encroachment of religious laws, in particular the rapidly growing reach of Sharia within the UK, and for the observance of the principle of one secular law for all. This principle provides the necessary preconditions for freedom of thought and expression, but alas of course does not necessarily guarantee them (e.g. witness the many pieces of legislation regarding thoughtcrimes against ‘diversity’, etc).
The reason for calling this protest at this point in time is explained by its organisers Maryam Namazie and Anne Marie Walters as follows:

The call follows an increased number of attacks on free expression in the UK, including a 17 year old being forced to remove a Jesus and Mo cartoon or face expulsion from his Sixth Form College and demands by the UCL Union that the Atheist society remove a Jesus and Mo cartoon from its Facebook page. It also follows threats of violence, police being called, and the cancellation of a meeting at Queen Mary College where One Law for All spokesperson Anne Marie Waters was to deliver a speech on Sharia. Saying ‘Who gave these kuffar the right to speak?’, an Islamist website called for the disruption of the meeting. Two days later at the same college, though, the Islamic Society held a meeting on traditional Islam with a speaker who has called for the death of apostates, those who mock Islam, and secularist Muslims.

Indeed, the threats made against Waters and those who attended the debate were truly chilling, and unlike much of the bluster associated with militant Islamists such as Anjem Choudary, the menace on this occasion was very specific as the following excerpt from a National Secular Society report shows:

Ms Waters was due to give a talk on behalf of the One Law for All campaign on 16 January but before it started, a man entered the lecture theatre, stood at the front with a camera and filmed the audience. He then said that he knew who everyone was, where they lived and if he heard anything negative about the Prophet, he would track them down.

The man also filmed students in the foyer and threatened to murder them and their families. On leaving the building, he joined a large group of men, apparently there to support him. Students were told by security to stay in the lecture theatre for their own safety.

The President of Queen Mary's Atheism, Secularism and Humanism Society, who organised the event said: "This event was supposed to be an opportunity for people of different religions and perspectives to debate, at a university that is supposed to be a beacon of free speech and debate.

What I would like to know is this: what have the police done since this incident to track down the man who made the threats and ascertain the identities of his supporters? Furthermore, is it not rather telling that there has not been a word of condemnation of this act from the so-called ‘anti-fascists’ of UAF, Searchlight and Hope Not Hate? All of them are in essence anti-English campaign organisations which push for restrictions upon freedom of thought, expression and political association, thus they are quite happy for Islamists to close down debate, threaten liberties and life and limb. Islamists and the authoritarian Left have much in common.
We must be eternally vigilant against those who would take it upon themselves to act as censor, and thereby to assume the role of arbiter over what may be expressed, and what may not. It was therefore of some surprise when the British Freedom Party recently declared its “20 Point Plan” which started well enough by stating that it wished to “Introduce a US style First Amendment guaranteeing Free Speech” but then went on to state in point number 15 that it would “Tighten regulations on the sexual/violent content of TV, films and games”. This does seem to be somewhat inconsistent. As Cygnus (a regular reader of this blog) noted, we already have a significant amount of legislation dealing with these matters, and it is the failure to observe the letter of the law when say selling violent computer games to children younger than the stipulated age, that causes problems. As for adults, they should be able to view, read and play what they wish.
There was an earlier Rally for Free Expression organised by Peter Risdon which was held in Trafalgar Square on 25 March 2006. This was poorly attended but attracted a large number of police with surveillance equipment. Everyone who participated on the day was filmed and photographed. Its detractors dubbed it ‘Islamophobic’, ‘far-right’ and ‘racist’: the standard stigmatising verbal repertoire of those unable to justify and defend their position through reason. How well attended will the OLFA equivalent be, and what will its opponents and the so-called anti-fascists say of it? Will it be opposed by militant Islamists as has happened in the past when a group of "Allahu-Akbar!" chanting protestors turned up marching with UAF placards in hand (video here)? Will the media give it any support? Unfortunately, I suspect that the NUJ will attempt to overlook this rather uncomfortable protest, for it highlights the ugly reality of one of the problems spawned by cultural relativist multiculturalism in the UK today. As such, it breaches one of the great official taboos of our current age.
Posted by Durotrigan at 10:49