Congratulations are in order to the 15-20 men of the EDL who turned up to demonstrate against halal meat at an Asda supermarket in Rochdale on Saturday 14 January. Sadly, it is reported that the police were called and that the protesters were then ejected. This perhaps had something to do with the location that the men had chosen for the protest: inside the Dane Street store next to the halal meat section itself. We shouldn’t be surprised therefore that they were moved on.
Although it is certainly a good idea to draw shoppers' attention to businesses that sell halal meat and to the animal cruelty involved in halal slaughter, it would be best not to choose to protest inside a store, but rather outside with say some double-sided A5 or A4 flyers outlining the outrageous exemptions to animal welfare standards made on behalf of religious slaughter without pre-stunning.
Perhaps the oddest aspect of this protest was the perplexed response that it elicited. According to the Rochdale News:

“A spokesperson for Asda said: ""We were surprised at the protest because we cater for everyone, from the new Butcher's Selection display in aisle 31 to the halal concession on the back wall - both have been successful since their launches last year."”

How strange! This individual seems to be either completely oblivious to what halal meat is, or is utterly indifferent to the fact that it entails additional suffering to that undergone by a sentient creature in the slaughter process. Quite clearly, Asda management need to be informed about the nature of this Islamic practice. And to think that such people have the gall to call members of the EDL “ignorant knuckledraggers”! The bigotry and complacency of such multiculturally-inclined businesspeople is startling.
The British Humanist Association has been running a campaign against religious slaughter for quite some time, and it is worth visiting their webpage dealing with this topic, for it contains many good tips on what to do to help bring about a change in legislation to bring these practices to an end. Interestingly, it hosts a number of replies to its letter sent in 2010 asking retailers if they only sell meat from animals which were pre-stunned in the slaughter process. Asda was not amongst the respondents.
The EDL should aim to shame those businesses that sell meat produced through methods of religious slaughter that cause undue additional suffering, and thereby damage their business if they do not change their practices. As a shopper, you can make an informed choice: spend your money elsewhere. Personally, I buy all of my meat from a good local English butcher where I can be sure of its provenance (I also only eat free range, which means that I generally miss out on poultry). If you must buy your meat from a supermarket, consider Morrisons who replied to the BHA as follows:

“At Morrisons we only sell 100% British fresh beef, lamb and poultry. None of it is Halal. The vast majority of our fresh beef and lamb is processed at our own abattoirs in Britain. We adhere to high standards of animal welfare. All of the cattle, lamb and poultry are stunned prior to slaughter.
Our own label frozen beef and poultry is all UK slaughtered and is not Halal.
Our own label frozen lamb is currently sourced from New Zealand and is Halal, the animal is humanely stunned before slaughter and a prayer is read.
The limited range of Halal and kosher branded frozen food products that we sell are all clearly labelled as such.”

It’s a pity that our Kiwi cousins have seemingly been driven by economics to embrace halal slaughter, but that is a matter for them to deal with. Be safe and buy British.
Once again, congratulations to those EDL activists in Rochdale who carried out the first action in what I hope will be an ongoing campaign of drawing public attention to the violation of animal welfare standards in this country in the name of multicultural ‘tolerance’. I am sure that our Gallic cousins in Bloc Identitaire will also look upon this with approval.

UPDATE: A contributor to the Casuals United blog named Roxanne has spoken to participants in Saturday's protest and posted a piece in which she states that it was not an official EDL protest, and was instead attended by a combination of EDL supporters and locals concerned at Asda's infringement of animal welfare through its sale of halal meat. She also claims that there were about 30 protesters rather than the 15 reported in the Rochdale News, and notes with appropriate satisfaction that the protest was entirely peaceful.
The traditional English Butcher's: a Halal-free Zone 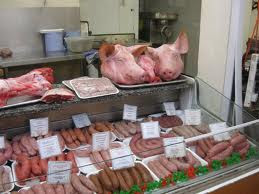