Incentivising Islam: the Folly of the British Penal System

Prisoners are by definition a highly disparate group of people united by one thing only: the fact that have broken the law and have been sentenced for this fact. One of the primary purposes of prison is of course to deny liberty to the inmates, for they, having broken their ‘contract’ with society, are being punished for this transgression. This is as it should be. The rights and freedoms of ordinary citizens in a free society should not therefore be accorded to prisoners. Their period of incarceration furnishes them with time to consider the reason(s) for their being there, and to reflect upon whether they should choose to reform their characters and conduct or otherwise. The prisoner must submit to the demands of the penal system, and not the penal system to the demands of the prisoner.
Ideally, the fundamental operational principles of prisons would function in accordance with the position outlined above, but the reality turns out to be rather different. Indeed, thanks to ‘diversity’ and ‘human rights’ [sic] legislation and the lobbying of certain aggressive activists from a particular religious background, our prison system today is offering positive incentives to inmates to convert to Islam. Our prison system is being subverted and transformed into an agent of Da’wah – Islamic proselytisation. “Nonsense!” I hear you cry. Really? Consider this: a headline in yesterday’s Daily Mail declared that “A third of inmates at Feltham youth jail are Muslims . . . and more convert to get better food.”
Of 686 prisoners, 229 are Muslims. The report states:

Sources claim that converts are attracted by the chance of better food and a more comfortable regime.

But there are also fears that some are being radicalised.

During Ramadan, Muslim prisoners are given food in separate hot and cold containers so they can eat what they choose at the end of their daylight fast.

A source revealed: ‘Over the last few years there has been a huge surge in those attending Muslim services.

‘The popularity of the faith has surprised people. We are seeing a large number of inmates converting to Islam.'

He added: ‘There is a difference between mainstream believers and extremists, but the fear is that some in the jail are being radicalised.

'Others convert for protection or to have what they believe is an easier lifestyle.’

Prison insiders say most non-Muslims are locked up during Friday prayers because so many guards are needed to monitor the lunchtime service.

The Ministry of Justice said: ‘The Prison Service is committed to ensuring the religious needs of prisoners of all faiths are met.’

No concessions should be given to Muslim prisoners. There should be no right to collective prayer; no imam on the prison payroll; no right to halal food; no right to the provision of separate meals. If they wish to fast during Ramadan, they can choose to eat the food provided at the appropriate times, or not to eat.
The fact that Islamists target non-Muslims for conversion in prison is well attested, as is the statistical overrepresentation of Muslims in not only prisons in Britain, but in other European countries that possess a Muslim population. This is indicative not of the fabricated and non-existent phenomenon of ‘institutional racism’, but of deep-rooted criminality amongst sections of the Muslim population, such as is manifested in systematic predatory paedophilia targeting English girls in many of our towns and cities. In 2008 it was estimated that 3.9% of the UK population was Muslim, but 12% of prisoners declared affiliation to that faith; in the same year, 20% of prisoners in the Netherlands were Muslim whilst Muslims made up 5.5% of the general population, and in Belgium 16% of prisoners were Muslim, although only 2% of Belgium’s population belonged to this faith group. In France in recent years, demographers estimate that 60-70% of the prison population is Muslim, whereas 7.6% of the French population in 2008 was thought to profess Islam. More information can be found at ‘Muslim Prison Populations in Europe’.
Quite clearly, there seems to be something specific to Islam that gives rise to criminality in European societies. Our prison system should not therefore be encouraging and facilitating the practice of this belief, but seeking to promote apostasy amongst Muslim inmates. If it does not do so, we will witness a further growth in criminality rooted in organised Islamic gangs and networks both within and without the prison walls; Islam will to all intents and purposes have been incentivised by the British penal system. This incentivisation must stop.
Former Feltham Inmates 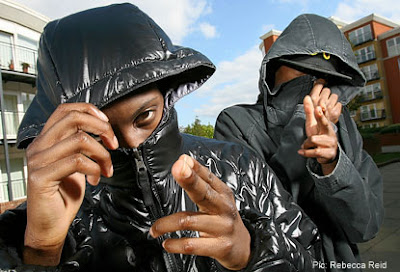