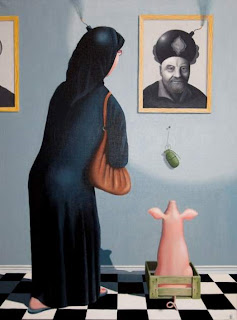 The Creeping Sharia blog has drawn attention to the decision of the Grenaa Town Hall in Denmark to remove a piece of art from its Easter exhibition. It was stated that this was done after a number of complaints were received from members of the public. No details were provided as to the identity of the complainants, but looking at this rather charming and amusing painting by the Danish artist Hans Christian Sørensen which brings to mind the surrealist style of René Magritte, one can have a good guess as to who these people were.

Before you leap to the conclusion that the detractors must have been the Danish equivalent of the British young (and not-so young) trendies who despise figurative art whilst professing a preferance for the ugly contentless work of Brit artists such as Tracey Emin (unmade beds, garden sheds and tents with the names of transitory boyfriends stitched to the fabric) and Damien Hirst (dead animals in tanks of formaldehyde, etc), think again. True, the complaints arose from others who despise figurative art, but some types of figurative art in particular i.e. any depicting that wretched Muhammed whose name we have to suffer all too frequently. So, why might Muslims be offended by Sørensen’s painting?

Firstly, it is amusing, and orthodox Muslims are not exactly renowned for their sense of humour. Secondly, it features a female figure wearing Muslim-style dress peering at a picture of Danish cartoonist Kurt Westergaard. Westergaard is the man who drew the most well-known of the Muhammed cartoons in September 2005 which led to uproar amongst Muslims across the world. Muhammed’s bomb-shaped turban with a fizzling fuse is in this picture transposed from the cartoon and placed upon Westergaard’s head, whilst the female Muslim onlooker’s hijab similarly features a smoking fuse. Thirdly, a pig sits in a box, intently staring upwards at Westergaard’s portrait. None of these pictorial elements is likely to have won the affections of ‘devout’ Muslim onlookers.

It is a great pity that the curators of the Grenaa exhibition should have chosen to remove this painting, for it is an original and amusing piece of art, and we see precious few of these nowadays in our public spaces. As Sørensen says:


“Art should be original and not copy anything. We can all paint flowers, but people see so much of it. Art should be debated, that [is] the point of it. That’s the difference between art and decoration.”

Too true. Congratulations Mr Sørensen upon producing this splendid piece, and commiserations on having it removed from public view. It would be wonderful if we could arrange for it to be exhibited somewhere in the UK.
Posted by Durotrigan at 15:44