No More Minarets in the UK!

Inspired by the example of the Swiss people today? The BNP were so taken with the striking design of the Swiss People's Party's minaret-ban campaign poster that they have produced their own version for the UK. This features a quote from the Turkish Prime Minister, as well as the policy positions of the UK's three largest Westminster parties on Turkey's EU membership. Does the imagery within the poster really look "sinister" compared to the quote from Tayyip Erdogan? Surely it is Mr Erdogan's statements that should cause us concern, not honest imagery about the imperialistic nature of Islam. 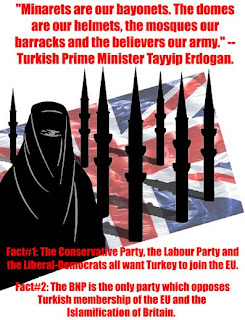