It is perhaps somewhat paradoxical that the parliamentary constituency of Bradford West is very much of the East in terms of both its outlook and demographic complexion. Its MP – George Galloway, of the peculiarly named ‘Respect’ Party – knows his electorate well, and is no shrinking violet when it comes to setting out his political stall, the wares of which habitually pertain to something going on far, far away from these shores, almost always in a land with a majority Muslim population. This is, of course, no coincidence, for the lands to which he refers possess a greater emotional resonance for the bulk of his electorate than other parts of the Bradford Metropolitan District, such as Ilkley. You won’t often hear a resident of Manningham singing ‘On Ilkla Moor Baht ‘at’, for the preferred ‘song’ that wafts through the air in the vicinity of the minaret-like mighty chimney of Manningham Mills is the somewhat less lyrical, and rather more solemnly intoned, “Allahu-akbar”! Such a welcoming sound! Then again, perhaps, not.


Galloway is a canny operator, and unlike many of his opponents, is a competent orator who fine-tunes what he says for his audience to provide an appearance of ‘authenticity’. His stance is emotive, and his speeches invested with a degree of physicality, both contrasting with the listless and dull styles of the likes of Miliband, Cameron and Clegg (Miliband’s speeches possess all of the gravitas displayed by a twelve-year old presenting to the class on what he did over the summer holidays). So much for the style, but what about the substance? Alas, little positive can be said regarding the content of Galloway’s speeches upon which his talents are wasted. The latest of these he delivered on the steps of Bradford City Hall on the evening of Sunday 18 January, to a crowd several hundred strong, which had gathered to condemn the principles of freedom speech and expression, or more specifically, Charlie Hebdo.


Gathered in the dark chill of a winter’s night, his fiery oratory revisited familiar territory to fan the glowing embers of his audience’s resentment: ‘double standards’ in which ‘free speech’ was only ‘free’ if you were not a Muslim. He used the case of the recent murders perpetrated by Islamists in Paris as an opportunity to talk of a supposed anti-Muslim ‘backlash’ in this country and elsewhere in Europe, repeatedly invoking the cliché of the Muslim as ‘powerless victim’, forever set upon by an innately ‘racist’ and ‘Islamophobic’ (sic.) society. His audience found his rhetoric emotionally sustaining; its tenor may have been predictable, but this is what his listeners yearned for. Of the images published by Charlie Hebdo he intoned:


If Galloway deems the image below to be ‘pornographic’, all that can be said is that he must possess some pretty ‘specialist’ tastes when it comes to arousal. Admittedly, he did make a fair point when posing the question as to why the Saudis should have had a prominent representative at the front of the Paris ‘Je suis Charlie’ march, for quite obviously there is no free speech in Saudi Arabia, and certainly no leeway for anyone to produce depictions, let alone cartoons of, Muhammed. 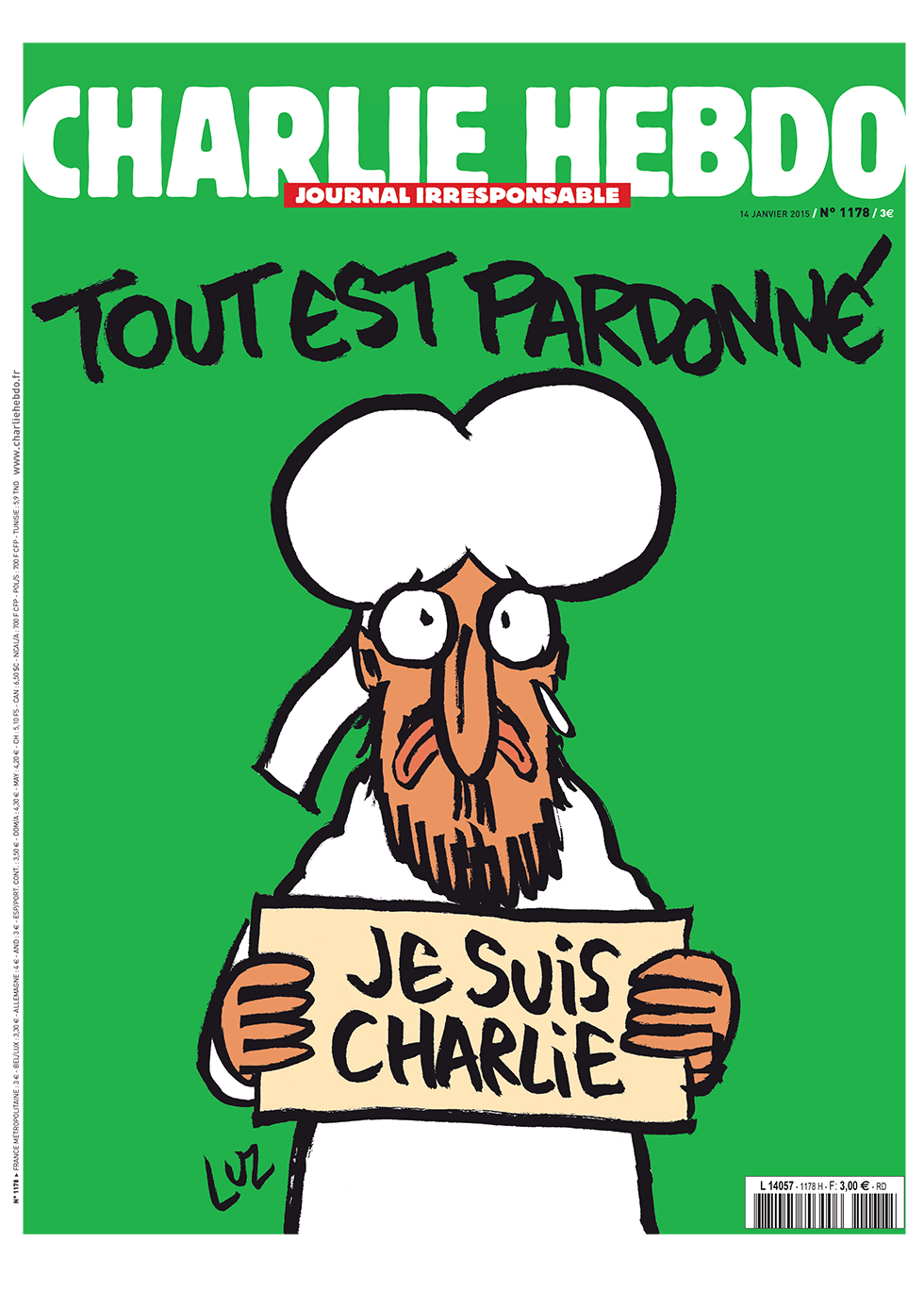 Offering a cursory condemnation of the murder of 17 people in Paris, Galloway quickly moved on to the main theme of his speech:


“Charlie Hebdo’s entire purpose, and for years, has been to further marginalise, further alienate, and further endanger exactly those parts of the community who are already alienated, already endangered. It is a racist, Islamophobic, hypocritical rag. Je ne suis pas Charlie Hebdo! We say that the honour of religious people, their prophets, their beliefs, is not fair game for such people because there are already limits to freedom of speech.”


The crowd, predominantly Muslim, warmed to his words. George Galloway, the MP for a post-English Muslim enclave in the heart of urban Yorkshire, was forwarding himself as the defender of the Islamic faith; the champion of a new de facto blasphemy law in defence of dark age obscurantism. In his peroration, he stated:


“So, for the sake of social peace, for the sake of unity in our society we have to demand from our Government the protection of the prophet from obscene and pornographic provocation, and in Parliament I intend to fight for that. Asalaam alaykum!”


To this, he might have added “and remember to vote for me at the forthcoming General Election, as I even went so far as to convert to Islam to win this constituency.” Perhaps it is being a little unfair to impute his conversion to tactical political cynicism, but then again, why would anyone with an ounce of intelligence who was not compelled to adopt this religion choose to embrace such a ragbag of incoherent religious twaddle? Furthermore, what sort of prophet and what sort of deity require the protection of the law? If this ‘Allah’ of theirs gets so offended by a few rather crudely drawn cartoons, he’s neither very balanced, nor omnipotent. Why should this be? Clearly because Allah only exists inside the heads of believers, for he is a work of fiction, and bad fiction at that. There really isn’t anything ‘akbar’ about him at all, and to have people demand respect for this nonsense is the greatest obscenity of all, particularly when considering that his beloved ‘prophet’ appears to have possessed anger issues on a level with those of Genghis Khan. This demand for ‘respect’ from Respect’s only MP, is offensive.