Izvestiia has announced that Russian Deputy Prime Minister Dmitrii Rogozin is planning ‘a series of scientific conferences’ with key personnel in Russia’s space sector, and has suggested that Russia ought to examine the possibility of establishing a manned scientific base on another planetary body rather than seek to extend the life of the International Space Station (ISS). In response to questions fielded by journalists regarding the future of manned spaceflight he stated:

“Let’s say, if we are speaking about the ISS, is there a point in continuing this programme as an international expedition which orbits around the Earth? Then again perhaps, in fact there would be sense in attempting to address such [scientific] questions by locating a station of this type directly on other planets. It needs to be considered.”

The first of the projected conferences will take place in April, with a view to determining ambitious goals in space exploration.
Whereas Russia remains the only participating nation capable of launching humans to the ISS since the retirement of the US shuttle fleet, its recent endeavours in space exploration have been inglorious. The late ambitious Phobos-Grunt Mission which was intended to travel to the Martian moon of Phobos, collect a sample from its surface and return it to Earth, managed to get no further than Earth orbit following a hardware failure after its initial launch. The doomed orbiter and lander therefore suffered the indignity of a fiery re-entry to Earth’s atmosphere, where it burned up over the Pacific.
NASA and ESA planetary missions have been far more successful than their Russian counterparts, and although the Russian Space Agency – Roskosmos – currently enjoys a good reputation in launching human and inanimate cargos into low-Earth orbit, the glory days of the Soviet space programme are long gone. Rogozin however, evidently views space exploration as a matter of national prestige, and is thus looking at increasing the space sector’s profile. Such an approach of course is not new, and politicians of all stripes and hues in a number of countries over the years have appealed to the spirit of exploration and innovation to justify ambitious space programmes that have often promised more than the Earth (Mars to be precise in the cases of Bushes senior and junior, and then an asteroid and Mars by Obama), yet have delivered precious little since the heated rivalry of the Space Race in the 1960s.
The global economic crisis has had a particularly negative impact upon NASA and ESA, with each agency scaling back its programme of exploration, both manned and robotic, owing to budgetary retrenchment. Plans to send humans to Mars  - overseen by rocket ace Wernher von Braun – were already in existence in the early 1970s, with the intention being to undertake such missions later in the decade or in the early 1980s. However, as the Apollo Programme fizzled out amidst public indifference to the last manned lunar missions, NASA’s vision shrank, with the manned space programme thereafter being confined to low-Earth orbit. NASA’s subsequent glories have been in the robotic exploration of the Solar System, through missions such as the two Voyagers, Galileo, Cassini-Huygens (in conjunction with ESA) and various rover and orbiter missions to Mars. By comparison, the Soviet Union’s and Russia’s record in planetary exploration has been dismal, with the majority of their orbiters and probes failing, although their Venera landers did manage to yield a first glimpse of the hellish Venusian surface.
Whilst both NASA and ESA have been scaling back their ambitions, new spacefaring nations – China and India – have been scaling up theirs. It is China in particular which now appears to wish to leapfrog the established space powers, having already established its own manned launch capability and having concrete plans to create its own orbiting space station in the near future. China has also declared its intent to send taikonauts to the Moon by 2025, and to then establish a lunar base. Under George Bush, NASA had pledged to return to the Moon by 2019 and to build a lunar outpost by 2024, but the Constellation Programme was scrapped as too costly under the Obama administration. Obama instead expressed the oft-repeated desire to send a manned mission to Mars, but at some unspecified point in the 2030s or even 2040s. In the interim, the objective of a manned deep space mission to an asteroid was declared, but once again, without any firm dates or realistic budgetary commitments. It therefore seems likely that it will be China’s ambitions in space which will serve to kick-start any potential serious non-robotic exploration of the Solar System.
Rogozin, as a Russian of a nationalist bent, clearly finds the prospect of manned space exploration an alluring one. Quite how much valuable data has been mined from the imperfect analogue of a mission to Mars provided by the Mars 500 Project which concluded in Star City just outside of Moscow last year remains to be seen, but perhaps it has spurred Rogozin and others within Russia’s space sector to reconceptualise what may be possible in the near future, with a view to once again putting Russia at the forefront of cutting edge science. So, despite the unpleasant, smelly and not to mention dangerous reality of life away from Mother Earth, we could yet live to see human feet once again making bold impressions in the lunar dust, and possibly alighting for the first time on the surface of another planet: Mars.
Phobos-Grunt: Russia's latest failed space mission 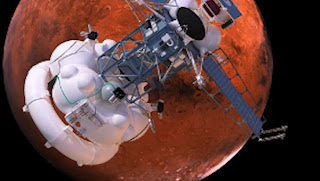