“By the grace of God” - Galloway’s Bradford West Victory

"By the Grace of God we have won the most sensational victory in British political history" tweeted Galloway upon winning the Bradford West by-election. The bizarre five-word opening of this tweet is not so much indicative of Galloway’s belief that he is some contemporary Cromwell, but of the fact that he fought a campaign in a non-English seat, dominated by the Muslim bloc vote.
Galloway’s win was undeniably dramatic, overturning a comfortable Labour majority and bagging just under 56% of the vote (55.89%). Not only did the Labour vote collapse, but so too did that of the Conservatives and the Liberal Democrats, as illustrated by the following shares of the vote: Labour – 24.99% (-20.36%); Conservative – 8.37% (-22.78%) and Liberal Democrat – 4.59% (-7.08%). The other smaller parties had no cause for celebration either, for the Greens won only 1.47% (-0.85%) and the Democratic Nationalists 1.05% (a marginal fall on the 2010 result). The UKIP and Loony candidates were the only others to increase their share of the vote slightly, with UKIP taking 3.31% (+1.31%).
How and why did this happen? Quite clearly, we should not expect a repeat of such a result for Respect in other constituencies that are not of this type, for Galloway actually took votes from the Conservatives and Liberal Democrats, whose supporters would never normally dream of voting for Respect, a party that lies firmly to the Left of Labour. Unlike other candidates, he chose to concentrate upon the issue of Afghanistan and calling for the return of our troops (a policy that I happen to agree with) but this would not resonate to such an extent elsewhere.

So, the question has to be asked: why did it resonate here? It did so for an obvious reason, but one which the BBC has not mentioned and would not wish to highlight: the Muslim bloc vote; Muslim voters possess a distinct collective identity and set of policy concerns that are at variance with those of the rest of society. Could Galloway’s victory yesterday represent the ‘maturation’ of a new Muslim confessional politics that sees Muslims willing to vote for a party that represents their specific interests rather than those of the wider society? Galloway may have stopped short of exclaiming “Allahu Akbar!” upon winning the seat, but his “By the grace of God” comment came perilously close. 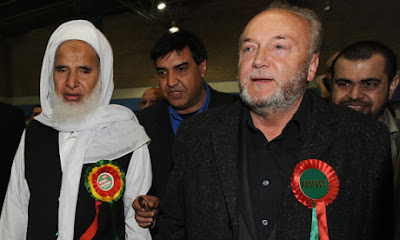